The bedroom was not the most challenging of the renovation projects.  It was, for the most part, structurally sound. Aesthetically, it was a monster!

Here is the before picture.  Not so bad, despite the cheap 70s paneling.  As a reminder, this was previously used as the kitchen –  hence the kitchen sink. But that was about all the evidence to be found.  Otherwise, it was a small yet average room. 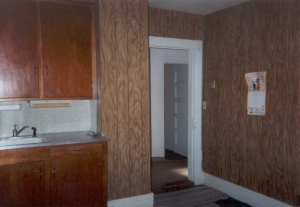 Once we started to peel back the layers, this is what we found underneath:

The one picture I’m sorry I didn’t get was of Mom pulling down a single ceiling tile and watching the remaining tiles collapse in one fell swoop.  It was beautiful, unlike what was exposed:

Fortunately, it looked a lot worse than it really was.  There were parts of the ceiling that required patching, and the exterior wall facing the back of the house had leaked over the years, causing the old clay and horsehair to deteriorate thus needed replacing. Plus the sink alcove had to be built out to accomodate the tub on the bathroom side of the wall.

But the rest was just paint, drywall, trim and A LOT of elbow grease.  [Mom may look like she’s having a good time, but she’s just inhaled noxious microbes.]

Below are the “after” pictures. The room is so small, I’m unable to get a full shot.  But I think the results can be easily pieced together. It’s a bit sparse in its decor, but I’ll just let that evolve over time.

4 thoughts on “Renovation Reminiscences – The Bedroom”