The Irish garden is officially up and running! 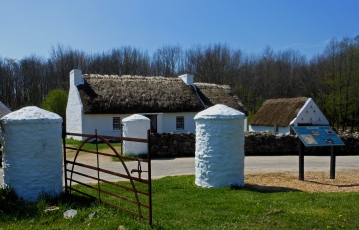 When I first visited the farm this spring, there was still some question as to the location of the garden.  Fortunately, the powers-that-be elected to reuse the old,  flat field across from the house versus the rocky slope behind. I don’t know the complete game plan, but it appears that a large section on the right side of the field has been plowed and seeded with either oats or wheat. My domain is the vegetable garden running across the front.  Only a small portion has been planted, as indicated by the sticks and/or rock piles. Peas, cabbage, and onions dominate so far, though there are also some flowers and herbs.  And an impressive display of  rhubarb, which is the only thing that’s sprouted so far.  For authenticity’s sake, I would think that potatoes would also be featured here, but, I am merely the gardener – not the master.

Regardless, there was not a lot for me to do on Sunday except pull grass clods out of the newly turned soil. And pull I did,  for nearly 3 hours.   Not much to look at, I know.  But if all goes as planned – and the rains do not fail us – this modest garden will be bursting at the seams in 2 month’s time.  Until then, I will patiently wait for Mother Nature to do her thing.  But I wish she’d get a move on it.  I’ve been waiting a long time for this summer!