I bought my fixer-upper 11 years ago this November. Yes, eleven years.  Can you believe it?  I bought for two reasons:  it was solid, and it was cheap.  I overlooked all the little quirky fixes and poorly executed DIY projects done over the years. And the fact that it had no kitchen or functioning bathroom.

I’m proud to say that most of the major eyesores and death traps have now been addressed.  [I’m pretending that the roof will survive another you and invite you to do the same].  One small project that needed my attention from the get go was the entrance to the kitchen door.  It really is a small project, but it remained under my radar until this past week.  Part of my rationalization was due to the fact that it simply never bothered me.  More than that, I had not worked with decking/pressure treated lumber until this year.  Working with a new medium intimidates me, so I waited it out until I could take it no longer.  And as of this past weekend, I could take it no longer.

For eleven years now, I’ve had to climb up and down a stack of old cinder blocks.  Not only are they shaky, they are pretty unsightly, as is my trash can that sits perched on the basement window well cover to the left of the door.The cinder blocks worked well enough, and no one died,  so I wasn’t really motivated to change anything.

But this past week, this arrangement started to get on my last nerve.  I’d worked so hard to put in my herb and veggie gardens, and to rebuild my veggie box and potting stand.  Yet all I could see were the cinder blocks and trash can.  Time for a change.

I’m using the same blueprint I used for my bed and sofa: create a box and screw lumber across the top.  The only challenge here is that I had to build a freestanding deck with four legs of varying lengths.  I built the box and set it on top of cider blocks and shimmed with wood scraps until level.  Then I measured from the top of the deck to the top of the pre-existing footings (i.e. concrete blocks), cut the legs to length, and bolted them to the sides of the box.  A couple of hours work, and the hard part was done. 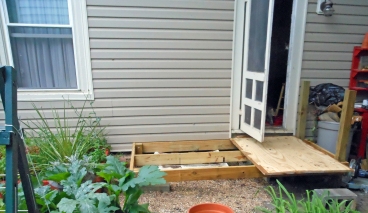 For the deck surface, my plan was to reuse the wood I’d used for the veggie boxes at the bottom of my hill. But the tree that fell on top of them was too big and unrelenting, so I now have to buy new wood for this project. Also, I had planned to finish this project on Sunday, but our 50% chance of afternoon showers turned into a full day rain event and I had to put it off until next week.  In the meantime, I’m using a plywood table top as support, and I’m already loving my little deck. Isn’t it swank?  I added two taller posts on the right for support and as a frame to add a trash-can concealing wall.  I’m ridiculously giddy to finally have a place to stow my ugly trash can!

As always, it’s the little things that matter.