I haven’t felt very chatty lately, but there’s been a lot going on behind the scenes and I thought it time for an update. When I last posted, I was working on the front and back hallway, determined to finish each before moving on.  Of course, that didn’t work. It never does when I’m involved.  But to be fair, it is more about prioritizing the disbursement of my meager discretionary funds.  The hall can wait; the kitchen cannot. I’ve been living with a large hole in my kitchen ceiling.  It really wasn’t a problem until the winter winds and sub-zero temps kicked in. Remodeling my kitchen is a project I’ve put off for years as it is a complete demolition project – starting with the ceiling.  It’s a dirty, thankless task.  Words cannot do it justice, but I think this picture does. 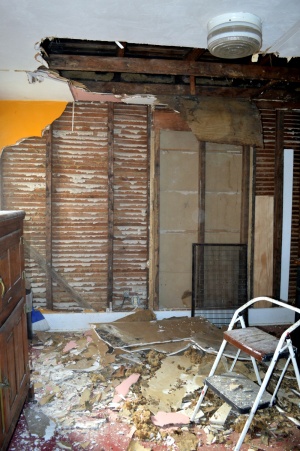 8 contractor bags of debris later, I cleared out between 1/3 and 1/2 of the ceiling.  It got easier as I moved towards the outer wall because there was less water damage and the old insulation came out intact.  What I didn’t realize going in is that there were actually two layers of drywall.  Old, heavy drywall.  The joists will thank me when it’s all gone.

At the end of day one, I’d cleared out three rows of muck and temporarily packed with new insulation to block some of the cold air.  I also spent a good hour staring at the ceiling, trying to figure out what to do next.  Aside from adding new insulation, my goal for the ceiling is to move the drywall on top of the joists leaving them exposed and giving me additional 4-5″ of headroom. My first plan was to span 1″x2″ pieces of wood across the joists, glue them down with construction adhesive, them screw the drywall in.  But it was heavy and awkward, and the glue wouldn’t withstand the force of the drilling.  After a good long stare, I figured I could cut the wood strips to span the width of two joists, screw the planels on while on the ground, then just insert them like modern drop panels. And sure enough, it seems to be working.  Of course, I ran out of drywall just as I was getting my rhthym going, but it’s all good.  I’ve got all the holes plugged with insulation, and the drywall can go up anytime. The hardest part now is forcing myself to pull out the rest of the ceiling.

Until then, I have more projects lining up.  First up is finding an electrican who can repair the damaged caused when my living room lamp caught on fire.  It shut down half of the electricty in my house (fortunately, the unimportant half).  I need to bite the bullet and get a quote for upgrading my system anyway, so perhaps it’s a sign.  Oh, and I uncovered a squirrel-gnawed wire leading to the overhead light in my kitchen.  I now suspect there is more damage and need to take a look around my attic before I get the juice turned on.  Not the jolliest of weekends, but I guess it could have been worse.  At least I didn’t find an electrocuted squirrel carcass.